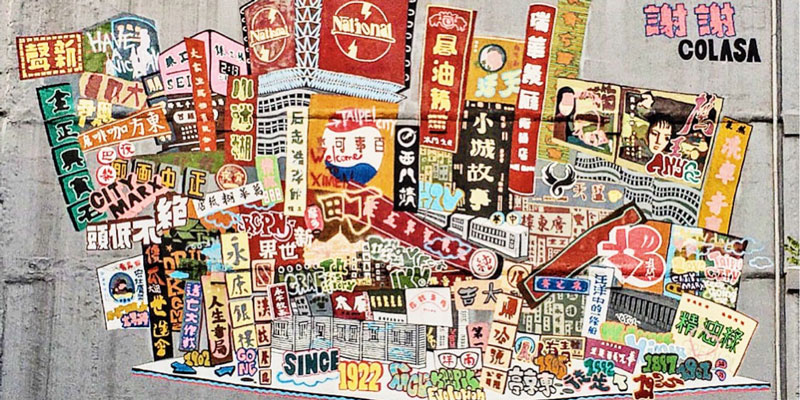 
The history of Ximen can date way back to the Japanese Colonization period.
Nowadays it’s it’s a PARADISE for teenagers in Taipei.
Now there's A LOT to discover here, whether for food, for clothes, shoes, or bars.
Below are some places where you can start!

So this is one of the character that ximen got really famous for, basically in Taiwan we have a street for every specific thing, bookstores, cram schools, beef noodle, then here's also MOVIES!!!!! There’s up to more than 20 movie theaters around this place, The Rocky Horror show and some other cool stuff are often happening here!

Legit GRAFFITIES over here, lots of brands that are in the trend right now, an awesome place to shop for cool clothes or just to feel the vibe. Not a lot of people around comparing to the main shopping area of ximen, so it's a great spot to just chill.

A few tattoo stores gathered here with great atmosphere, lots of choices and the sales can also speak English, so language barrier is not a problem here, also some makeup stores for the girls! and venders neerby.

located in the building called THOUSAND YEARS BUILDING it's a great place to shop for shoes and clothes, and also for piercing and stuff. The coolest thing here is the ARCADES MACHINES though!!!!! DDR like the videos from Russel Peters and Mario carts and everything you can think of is right here! It's called the TOMS WORLD! Definitely check this place out!

A machine that teenagers just love. You think it’d only be seen in Japan, but it actually played a great part of the 90’s people’s childhood, but somehow they shut it all down. But now it's reliving again in the XING KONG CINEMAS!!!!!!!!!

We Taiwanese love singing even if we're not ever on the right tone, there's PARTY WORLD, HOLIDAY and those are the three biggest chains here in Taipei! They serve great food and also have drinks you can order. The famous GANGNAM STYLE is also available here!!!!!

Used to be a THEATER back in Japanese colonization, now the ground floor helds some small exhibition and tells a little history of the building. Also there's a CREATIVE INDUSTRY FAIR beside it during the weekend. Not it still holds some events, or even have party around it during Halloween.

Right behind the red house, the vibe here is beyond AWESOME. More than 5bars here, and some have shisha as well, the people who work here are all super friendly, it's a great location to have a drink with friends and catchup.

At the entrance of this place you might have the wrong idea of this place, something dirty might pop up, but it's actually an old fashion style of music, tracing back to 1960. The people off stage tip the performers with the money in the red envelope, in order to encourage their favorite singer. Also I heard that it's the only one left in Taipei!!!!!

I must say Taiwanese are all foodies, so here you can discover a few venders like the ones you find in the night markets. And while talking about ximen there's one place called 阿宗麵線 AZongMianXian. It serves one of the most known dishes THE INTESTINES NOODLES. What's so special about it is that not only there's a crazy long ass line in front of it all the time, but people actually stand right outside the place to eat it. Even if it's really hot in the summer and you can sweat while eating it, so that’s just how good it is!!!!!

This model kind of give you the idea of how big Taipei City use to be like with the gates during Ching Dynasty. And guess what? It’s also an iconic place for a SELFIE! Why? Because one of the statue around it is two young people taking selfie! So a lot of people would go around that statue and take a selfie with them!

Aka the MaZu Temple, worshipping one of the most popular Daoism goddess who protects the fisherman in the first place, nowadays whenever people are going abroad they would like to pray to this goddess first. Inside here is SERENITY, very quiet and peaceful unlike outside it is still bustling. The lanterns and candles are BEAUTIFUL. I would say XIMEN not only is a place for shopping but it also have it’s history behind it, so DEFINITELY CHECK THIS PLACE OUT while you’re in Taipei!

You may say, "So, how do I find these amazing spots?"

I know, it's almost impossible to navigate through the jungle of Ximen district. Here's a solution, join the local free walking tour - Old Town Taipei tour to explore all the hidden jems of Ximen.