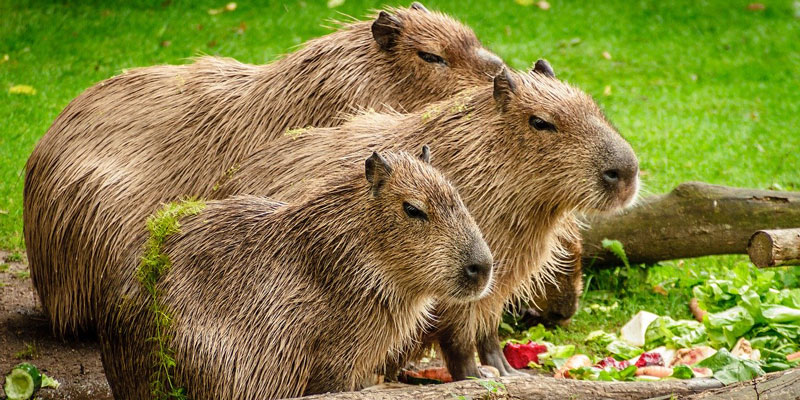 Scouting at the Taipei Zoo like a pro! Local’s tip to the ecology of Taiwan

If you happen to be an animal lover and want to know more about Taiwan’s fauna, but don’t want to get all muddy and sweaty tromping through the mountains, then here’s your chance! Stop by The Taipei Zoo and get to know Taiwan’s indigenous animals. 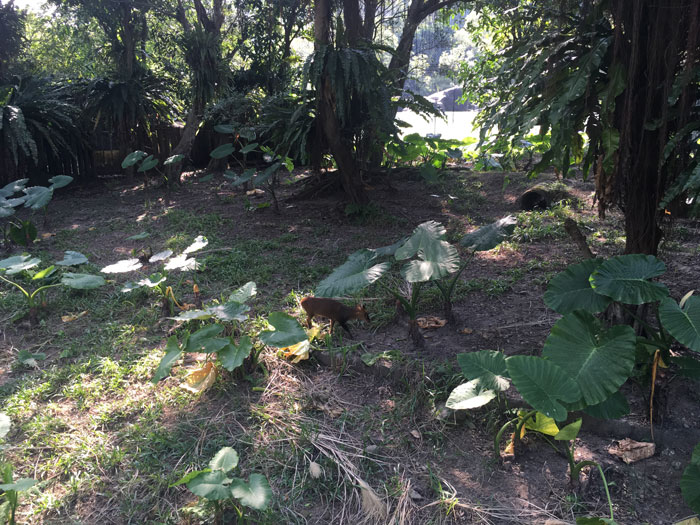 Taipei Zoo is devoted to simulate the original habitat, so you probably need Darwin’s eyes to find them.

You aren’t going to see a Formosan Black Bear walking around Taipei 101. The Ximen district is exciting, but it doesn’t have any Formosan Flying Foxes. And the Presidential Palace is sadly lacking in Crab-eating Mongeese. The Taipei Zoo has been growing and developing for over 100 years. It has more than 377 animal species in 15 different outdoor areas and indoor pavilions. And it’s responsible for wildlife conservation as well as environmental education. Plus, there’s pandas. 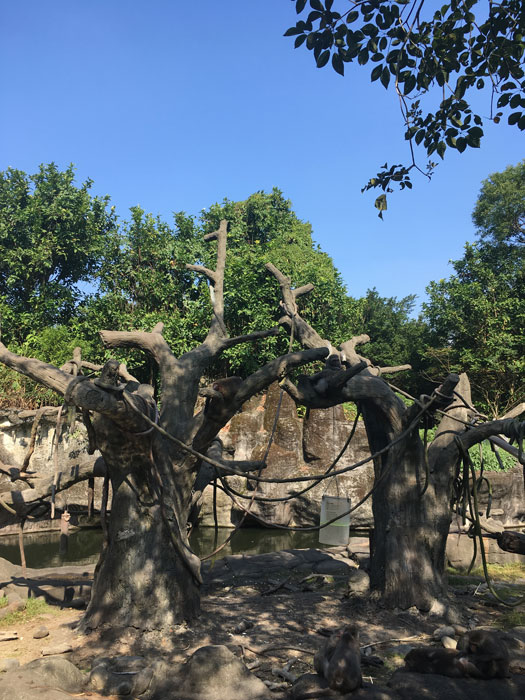 Extra devices are installed to engage Formosan Rock Macaques in more diversified activities, but it is apparent that they prefer one single boring action: sleeping.


As the leading animal institute in Taiwan, The Taipei Zoo has been dedicated to building environments that are nearly identical to the natural habitats of each species instead of just caging animals up in boring concrete spaces. As expected, you will see great diversity amongst the exhibition areas, from semi-arid prairies or lush forests, to gurgling creeks with curious meerkats, stealthy leopard cats and squeaky otters. There are multiple facilities to engage captive animals in various activities, which relieves them from boredom, and helps them remain energetic. You are guaranteed to see healthy animals playing and running around. Plus, there’s pandas! 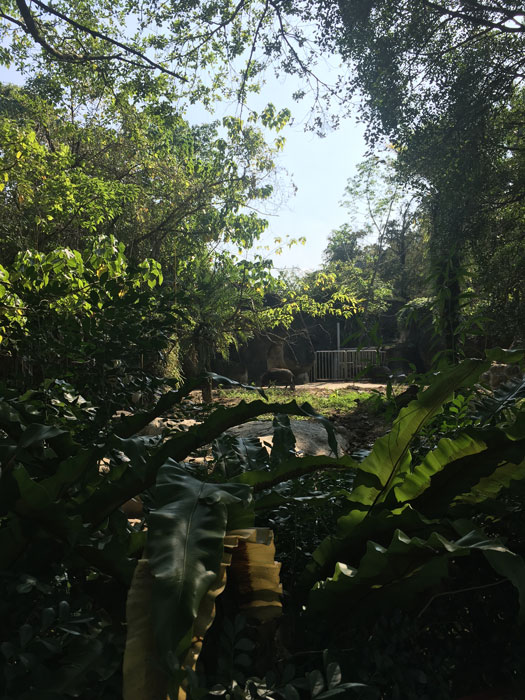 The Formosan Wild Boar is taking an afternoon stroll from a distance where it feels comfortable. This picture faithfully shows you what it is like when you are at the zoo. Perfect close-up photos are fake.


As zoogoers, you will be excited to come face to face (perhaps with glass separating you) with nearly any species comes to your mind: tigers, lions, elephants, zebras, you name it. In the exhibition areas, there is also detailed information for you in both Chinese and English. Do remember to read the signs and learn some fun facts! For those who are attracted to the ecology of Taiwan, the following two areas will amaze you: 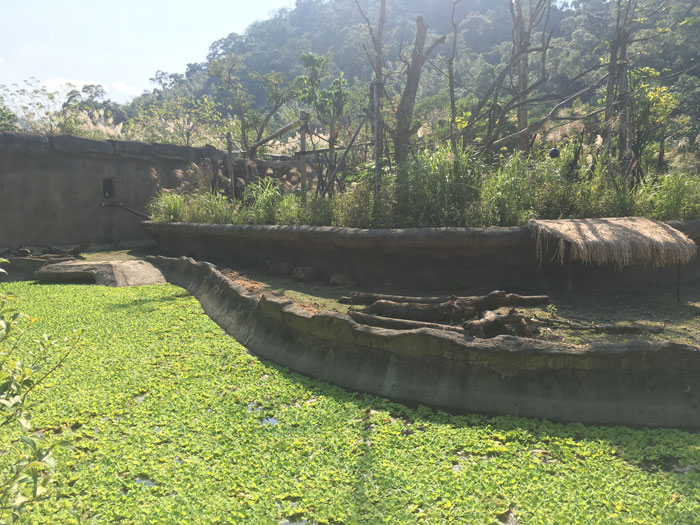 It’s so hot that Capybaras decide to take a nap in the shade. They clock out early today.

The Formosan Animal Area is adjacent to the entrance, so it will probably be your first stop in the zoo. Here you can take a close look at the indigenous species of Taiwan. You’ll see Formosan Black Bears with their trademark white, V-shaped mark on their chests are found lying around all drowsy on the rocks during the day. Formosan Serows, which look like a goat-deer, climb up on the cliffs overlooking the surrounding landscape. Formosan Wild Boars can be seen taking their muddy baths, and if you are lucky, you might just see the boar cubs running around fidgeting while their mom stands guard. When you pass through the corridors of the habitat, you’ll be able to see some of the nocturnal species like Gem-faced Palm Civets busily searching for food under the dim light. These species are mostly endemic, and as the natural habitat gets destroyed, it is even more difficult to find them in the wild. Now you see how precious it is to witness them in person. 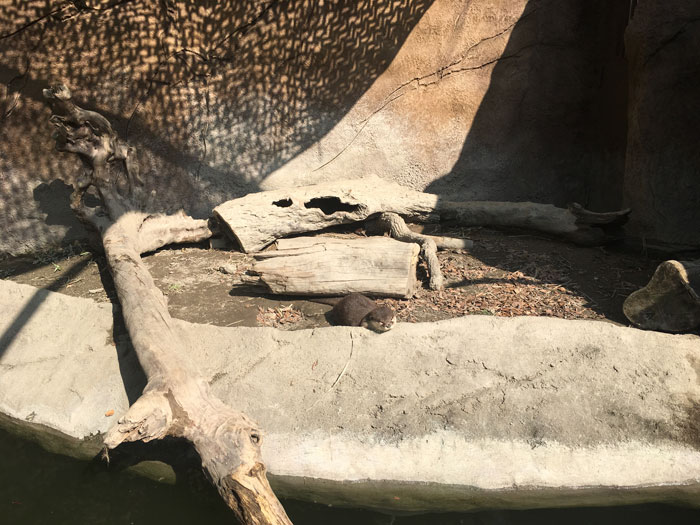 It’s so hot that An Asian small-clawed otter sleeps like a baby angel. So calm and so quite.

In 2019, a new pavilion was born: The Pangolin Dome. Inspired by the pangolin, which looks like an anteater made out of toenails, this facility features pangolins (of course) along with many other tropical species. In it, you can see the tropical tank with giant pirarucu fish swimming around peacefully as if you were in a mini aquarium. As you walk up the spiraling ramp, you can find bee-eaters tweeting and flying around. And when you reach the top of the ramp, you will see sloths curled up between the branches, enjoying their daydreams. Outside the Dome, there are capybaras, tapirs, and gibbons taking a sunbath over on the outdoor artificial islands. This is the first time that The Taipei Zoo has built a full 24 meter-high dome like this to faithfully simulate an entire tropical ecosystem, and it’s strikingly beautiful, both inside and out. 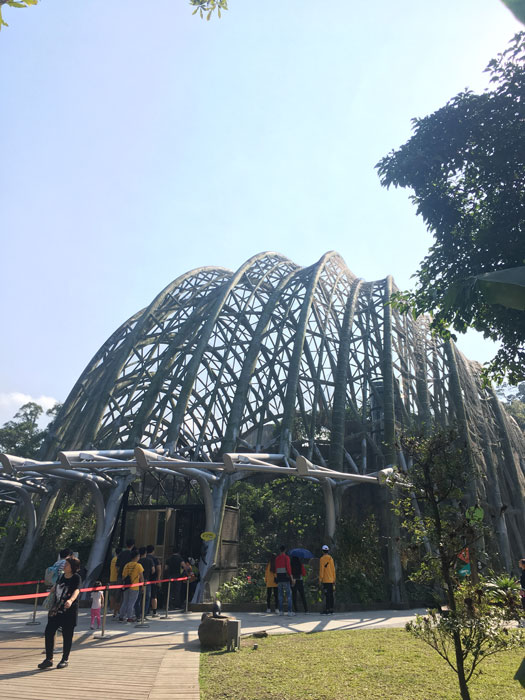 The Pangolin Dome nurtures various tropical animals from giant pirarucu to sloths and pangolins. I don’t think you can miss this huge greenhouse.

Starting in November, The Taipei Zoo has announced its feeding schedules for the very first time. If you want to see animals in their hyper state, don’t forget to check the timetable! Penguins and Eurasian Otters are fed three times a day, while hippos and alpacas are fed once. This is an important routine that lets the zookeepers check on the wellbeing of each animal, and it’s also a rare chance for visitors to see how the animals eat and play. Otter’s feeding sessions are my favorite. The mischievous little otters dash out from their burrows, running about the feeder like kindergarten kids trick-or-treating. Once they are full, they start playing around in the water with glistening air bubbles streaming behind them as they dart around in the water. 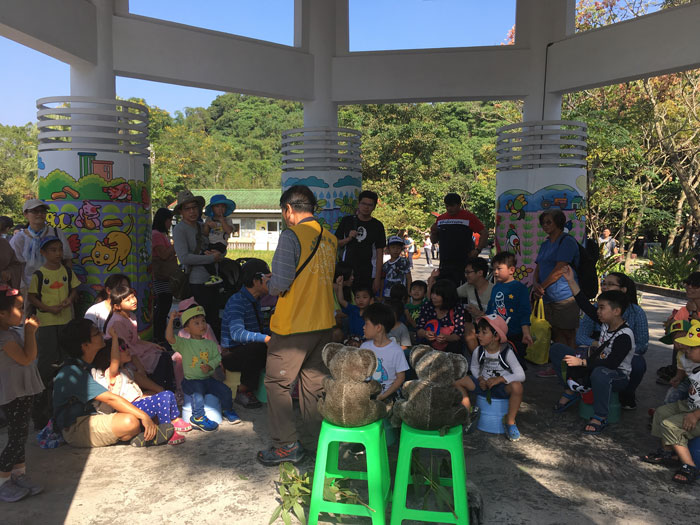 If you’re in luck, you can join the gathering hosted by volunteers. They will share some interesting animal trivia.

There is more in The Taipei Zoo for you to see. It’s one of the top ten largest municipal zoos in the world, and The Taipei Zoo will amaze you for sure. If you are in Taipei, do spend a day in the zoo, and appreciate this modern Noah’s Arc with other animal lovers. Here is my personal route to see everything. At the entrance, get your ticket for the Panda House and take a stroll at the Formosan Animal Area and the Insect Valley before your designated time at the Panda House arrives. Later, enjoy the Pangolin Dome and the Tropical Rainforest Area for a while. After that, go back to take the shuttle bus to the very end of the Zoo, the Temperate Zone Animal Area and the Penguin House. If you follow the signs correctly, you will pass through the rest of the areas on your way back to the entrance. Before the Zoo closes, go visit the koalas at the Koala House and the nearby Children’s Zoo. In the evening, take the gondola up to Maokong from the zoo to finish your journey with a traditional meal at the tea house up there, and enjoy a panoramic night view of Taipei. Hope you enjoy it! 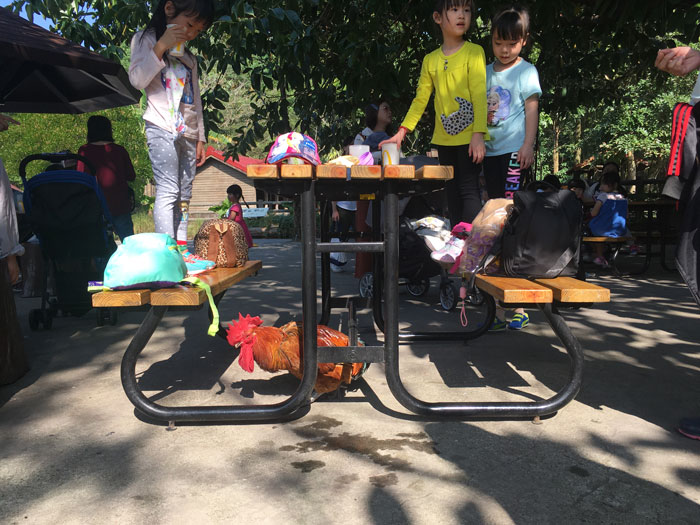 This rooster stepped out of its comfort zone on a quest some French fries. Who can resist the temptation anyway? 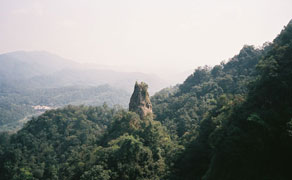